Let me be the first to tell you that if you missed the 2019 Brawlhalla Summer Champs online tournament you missed one hell of a ride. If you read our preview released late last week you’d know that the reigning champ, Sandstorm, was not able to attend this weekend making the singles side anyone’s game!

But we all know there were a couple crowd favorites…

We had a few interesting duos this weekend as we watched Tempo Storm’s Boomie team up with BloodDiamond in Sandstorm’s absence, wrenchd’s normal duos partner Starlight team up with Midget, and wrenchd himself team up with Cosolix. While Wildcard didn’t take home any podium finishes in duos- Singles, on the other hand… Well that was an interesting adventure.

On singles side we followed wrenchd exclusively this weekend and he certainly put on a show. Now there’s a few defining factors that made this tournament interesting. First, as stated before, Sandstorm was not able to attend. Second, wrenchd was knocked into the lower bracket really early with a devastating 2-0 sweep by Stevenator. This was huge and could have easily set the tone for the rest of the tournament- However it didn’t seem to phase the pro! And last but not least, there was a very interesting bet that was made in the live chat between wrenchd and Brawlhallla official commentator Sparky: 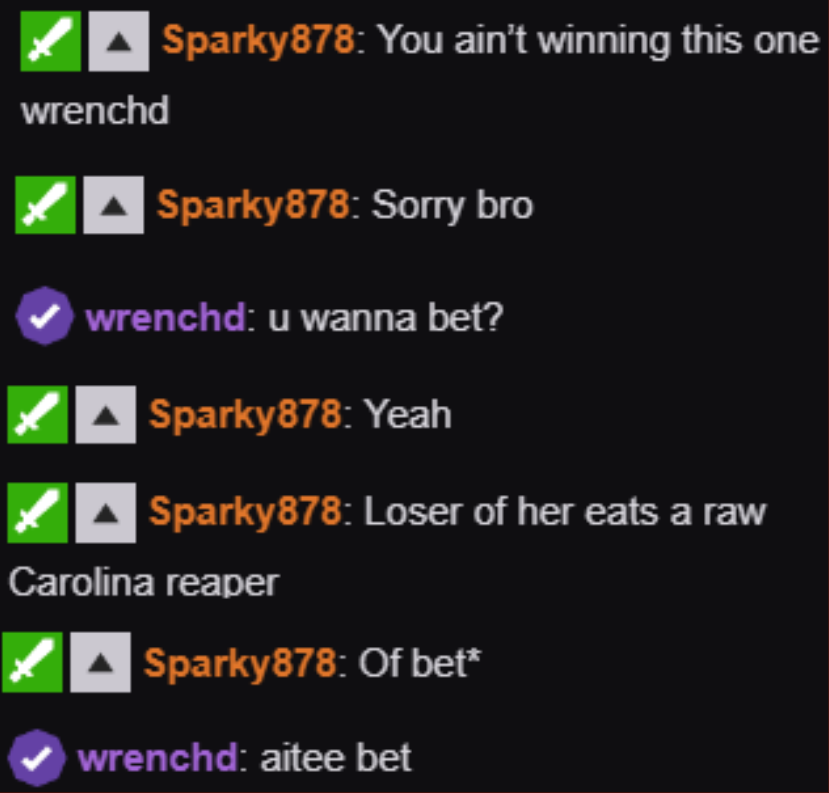 Need I say more? A very spicy pepper was riding on wrenchd’s success this weekend and if you have the time to go back and watch the matches it’s safe to say Sparky was nervous for the safety of his taste buds. Wrenchd did in fact win singles side this weekend, climbing all the way from the lower bracket and taking out some harsh competition just to meet Cody Travis in the grand finals! He had an easy 3-1 reset and then a heart stopping 3-2 set to take home the gold!

We’re so pumped for wrenchd and this well deserved and hard fought win and we can not wait to watch Sparky quite literally eat his words. If you missed the games live you can catch up on the bracket and standings by heading over to our Brawlhalla team page. https://wildcard.gg/brawlhalla/