In World of Warcraft Maros “Blizo” Molcan is arguably- If not the best- PVP Warrior in the world. He manages to play a class many consider not viable in player vs player, and without him Wildcard would not have had the season we did in 2019. With his expert skills (And his team, of course) as an Arms Warrior Blizo was able to effectively go toe-to-toe with last season’s meta, which really seemed to just beat down everyone and anyone who refused to cave and play it themselves. We’re proud to bring this guide to the World of Warcraft Arena community and we hope it inspires some new Arms Warriors!

When talking about Talents, Blizo recommends taking the standard selection, as of April 2020. That selection is:

Sudden Death
Approximately [1.69 + Haste] procs per minute
Your attacks have a chance to make your next Execute cost no Rage, be usable on any target regardless of their health, and deal damage as if you spent 40 Rage.

Defensive Stance
Instant – 6 sec cooldown
A defensive combat state that reduces all damage you take by 20%, and all damage you deal by 10%. Lasts until cancelled.

Warbreaker
Replaces Colossus Smash
Instant – 45 sec cooldown
Smash the ground and shatter the armor of all enemies within 8 yds, dealing (150% of Attack power) Physical damage and increasing damage you deal to them by 30% for 10 sec.

Avatar
Instant – 1.5 min cooldown
Transform into a colossus for 20 sec, causing you to deal 20% increased damage and removing all roots and snares.
Generates 20 Rage.

Gladiator’s Medallion
Replaces Honorable Medallion
Instant – 2 min cooldown
Removes all movement impairing effects and all effects which cause loss of control of your character while in PvP combat.

Sharpen Blade
Instant – 25 sec cooldown
When activated, your next Mortal Strike will deal 15% increased damage and reduce healing taken by 50% for 6 sec.

Blizo says to use this vs teams with high spell values you can reflect.

Blizo says Master and Commander is currently a great default choice this late in the expansion as stamina levels are quite high, making Rallying Cry a much stronger cooldown.

Blizo says Disarm is great at peeling melee offensive cooldowns and preventing crowd control, such as a rogues Kidney Shot and a warriors Storm Bolt. It can even be used offensively to prevent heals from a death knight’s Death Strike or stop a warrior from using Die by the Sword.

Duel – OPTIONAL
20 yd range
Instant – 1 min cooldown
You challenge the target to a duel. While challenged, all damage you and the target deal to all targets other than each other is reduced by 50%. Lasts 8 sec.

Blizo says Duel is an excellent tool for reducing the damage of enemy offensive cooldowns on your teammates.

Storm of Destruction – OPTIONAL
Reduces the cooldown of Ravager, Bladestorm by 33%, and Ravager Bladestorm now also applies Mortal Wound to all targets you hit.

Blizo says Storm of Destruction can be used when facing melee cleaves to increase your overall damage, or against monks to Bladestorm every Ring of Peace.

War Banner – OPTIONAL
Instant – 1.5 min cooldown
You throw down a war banner at your feet, rallying your allies.
Increases movement speed by 30% and reduces the duration of all incoming crowd control effects by 50% to all allies within 30 yards of the war banner. Lasts 15 sec.

Blizo says War Banner is another strong defensive tool that can be used to reduce incoming crowd control on your team. 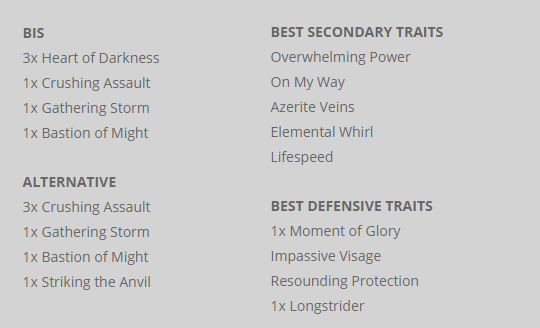 Versatile – Your best overall corruption for both offence and defense

Blizo says some major common mistakes Arms Warrior players make are wasting their mobility, forgetting to reuse mortal strike after sharpen blade, and getting stunned in battle stance. If you’re able to make yourself aware of these problems we’re sure you’ll be on the right path to Arms Warrior greatness!

About Wildcard Gaming
Wildcard Gaming is a leading Esports brand aiming to stabilize the uncertainty involved with the Esports industry. Wildcard has professional rosters in a variety of titles including PlayerUnknown’s Battlegrounds, Tom Clancy’s Rainbow Six Siege, World of Warcraft, and Brawlhalla. Welcome to the elite- Wildcard is here to dominate Esports at a Global Level. Join us, be a part of our family. #stackthedeck