Rolling in this weekend we have the Super Summer Slayem NA online Brawlhalla tournament. (what a mouth full) While our last tournament was online as well this one certainly holds different stakes as there is one large, defining factor: Sandstorm will be attending. At the last tournament Sandstorm was not able to make it leaving the podium wide open and for the taking. The favors were still on Wildcard’s side as wrenchd swooped in and took home the gold but… Can he do it again this weekend?

We’ve seen wrenchd hard at work practicing and dishing out some awesome YouTube content so we know he’s on top of things. However, with the latest patch that finally addressed Katars and hopefully balanced them will his Asuri game be on point? In a recent live stream wrenchd noted that the Katar Down Light did in fact feel different now. We’ll have to wait and see what he brings to the table. If you missed the patch notes, here’s what I’m talking about. 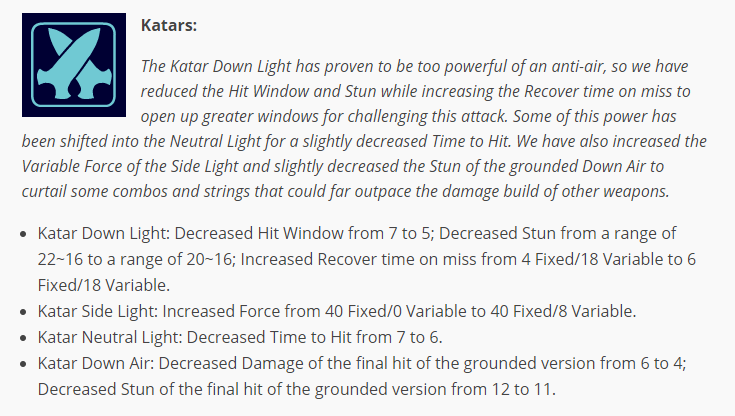 On the other end of Wildcard’s Brawlhalla players Sandstorm is back from a well deserved vacation and we’re excited to see how the bracket shifts in his wake. When the #1 pro player in the world is in the mix things always seem to get a lot more serious as the question is always the same: Who can beat the reigning champ? While the Katar balance is something Sandstorm has been asking for will it also affect his Lin Fei? On the recent patch Gauntlets also got some attention, however this was a buff! I have a feeling we’ll be seeing even more Mordex than we usually do. For reference, here’s the notes on Gauntlets.

Overall we’re all excited to watch the games this weekend and see how everything previously mentioned effects the tournament’s outcome. It seems for the world of Brawlhalla Wildcard’s deck is always stacked and we’re eagerly waiting for what we hope is another win. You can watch the games live at https://wildcard.gg/brawlhalla/ and cheer Sandstorm and wrenchd on with us!