The boys ended day 5 in 5th place overall up from 13th. It was a massive showing yesterday, January 11th, with back-to-back huge performances in Games 1 and 2. Ending game 1 with a Chicken Dinner and 8 kills, and finishing strong in game 2 with a 2nd medal and 11 kills, we have all but secured our spot in the North American Professional League! 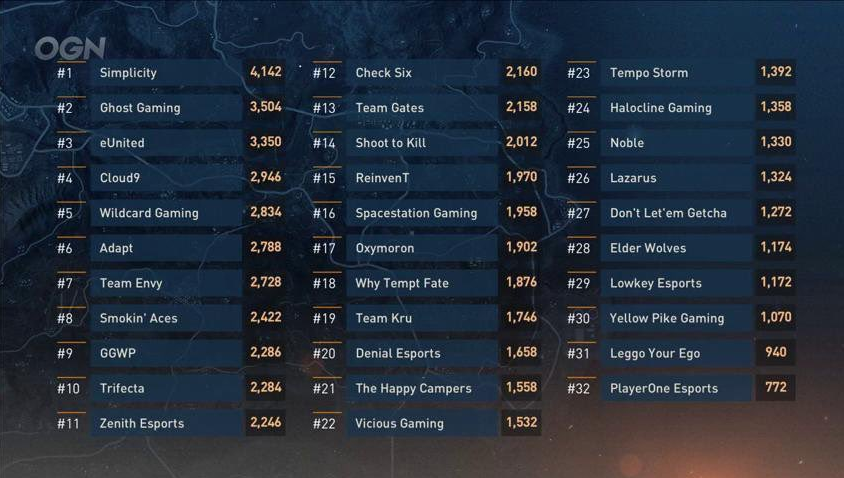 Groups C and D play today and the only team that currently threatens our position is Team Envy. Anything is possible and there could be some massive performances tonight; however, we are very confident in our standing and thrilled to be one of the 16 teams representing North America.
“This will be huge for us as our PUBG guys have remained one of, if not the most consistent team in North America.” Said William Lucas, Partnerships and Marketing Director for Wildcard Gaming. “We have always been underestimated up until recently and have had to qualify for almost everything up until the Pro League Lan Invites went out, so myself and the rest of the guys are very thankful to PUBG Corp. for recognizing the talents of our roster.”

NPL Day 1 was the day filled with highlight from our very own Sharpshot, as he connected with several long Snipes as well as the iconic ‘1v7’ play on Mirimar while protecting our entry fragger, Pride, in game 1 of the tournament. After Day 1 and 2 respectively, we sat in 18th (Sad Face Emoji) going into Day 3, knowing it was do or die time. As nerves began to settle in, we came out with a more consistent night as we took back to back 8th place finishes and two 4th placements through the day’s rounds. Our performance so far had earned us “The Most Consistent Team Award”, according to OGN Announcers, but we knew that we needed to step up our game and show everyone why we were invited to this event.

Yesterday on Friday, January 11th, we finally gave our fans what they were expecting.  “They needed this win,” exclaimed MatrymGG, one of the Desk Analysts. Xtreme and Pride as the solo surviving members in game 1, played the end game circle flawlessly and netted themselves a clean victory with 8 total frags for the game. “That was an excellent moral booster, we definitely needed that. We did a really wide rotate and Toumai called to do something different this game than we’ve been doing, so he led us all the way around the map to the back side of Apartments, which is where the circle ended up closing and we really played the last few circles well.” Said Russell “Xtreme” Walters in his on-stage interview.

After the next 3 games, we solidified the points required to see ourselves as a top seed for the Professional League. We are very excited for this year and to be a part of the $100,000 tournament tomorrow on Sunday January 13th.

Wildcard Gaming PUBG will be hitting the books tonight, analysing other teams, and we’ll be bringing our ‘A Game’ to Tomorrow’s Pro League final for $100,000.  Come watch with us at 6:00 PM Pacific at our very own site! You can view and keep up with all the coverage at https://wildcard.gg/pubg/. Grab the popcorn, your favorite buddies, and a nice Ice cold drink as we start the excitement for tomorrow’s games and the rest of this year! #WCWIN

Wildcard Gaming is a top tier, leading esports brand with professional rosters in a variety of titles including PlayerUnknown’s Battlegrounds, Fortnite, World of Warcraft, Brawlhala, and Battlerite. Wildcard Gaming was formed with the idea to stabilize the uncertainty involved with the esports industry. Welcome to the elite, Wildcard is here to dominate esports at the Global Level. Join us, be a part of our family.  #stackthedeck